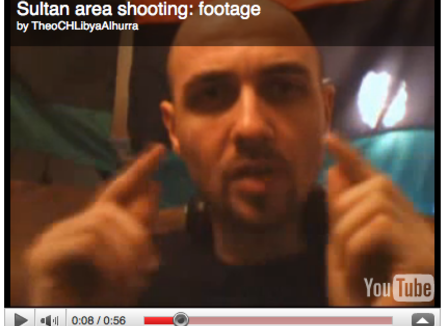 Libyan cyberactivist was killed today when broadcasting from the fight zone

Mohammed Nabbous , the blogger in Benghazi StreetPress was in contact with, has succumb to injuries this afternoon at 1pm, according to the moderators of Libya Alhurra blog . The terrible news was brough by his wife: the one who called himslef Mo was shot by a sniper.

This is the recording of Mo’s Wife speech :

In Benghazi a medical source contacted by StreetPress confirmed the news that had been announced before by Nabbous’ wife and by the chat moderators.

Posthumous vidéos Mohammed Nabbous, despite of the attacks and bombings, has gone this morning with his camera to shoot the libyan army attacks and broacast it in streaming on Libya Alhurra. Two videos have been sent this morning on the website, as a last testimony to his unfailing bravery.

First a video recorded on Friday afternoon , after the first attacks from pro-Ghaddafi forces on Benghazi . And then this audio report, this saturday morning, broadcasted live from the fight zones. Mohamed Nabbous was broadcasting live from his mobile phone:

Web Revolution Martyr The community of 500 followers of the live streaming is stunned. At this time they are more than 3700 people crying the telecom engineer wich is becoming the symbol of the revolution. In the last e-mail that StreetPress has get , Nabbous called “ the medias to not forget Libya” :StreetPress is sure the work he’s done was usefull. Mohammed Nabbous let his wife and their unbornd child.